Did I give away my feelings? My wife's always says I wear my heart on my sleeve! :-) Yeah, well IE is dead... yet... but I'm looking forward to the day when surfers wake up to the fact that they very likely aren't seeing the site that the web designer intended they see. Remember seeing this ridiculous image plastered around the web? It's sad to realize that some designers went out of their way to coddle Microsoft and it's disastrous set of web standards. Becuase of IE we have tags like <strong> whereas everyone else was using <b> to get text into bold. Why? Probably because they (Microsoft) could, they didn't care, and a huge number of end users didn't know. But, for the design world, it just created unnecessary work.

So, seeing as I've upgraded to Windows 7, and it doesn't run IE 6, 7, or 8, I was faced with running a virtual machine on my existing computer, or buying an old junker that had XP (probably MS's best OS yet)

running on it. I opted for the latter. All this to make sure that the sites I'm designing for my clients run properly on a dwindling browser - thanks Microsoft; good one! But all is not doom and gloom - well, at least for the design community!

In July 2008, IE had nearly 70% of the browser market share. In July 2012 - just 4 years later - it's share is a fraction over 32%. The ground lost has gone almost entirely to Google's offering, Chrome, which entered the market around July 2008. At the bottom of the article is a live feed courtesy of Statcounter showing the market shares of the various browsers.

To be fair, IE has come a long way from its early versions, now supporting such basic things as tabbed browsing, but it's still so far off with its standards that it's hard to consider it a serious player, 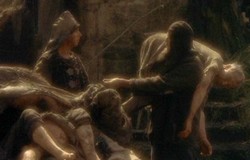 despite its market share. I can hear it saying, to echo that very funny line from Monty Python's Holy Grail, "I'm not dead yet!!!", to which I reply, "Well, he will be soon, he's very ill." Soon, in regards to IE, just won't be soon enough!

Tweet
5 "must haves" for internet marketing
Survive a Panda attack

More posts from author
Monday, 02 August 2021 Is that Domain name renewal legit or a scam?
Thursday, 25 June 2020 Using copyrighted image without consent scam
Thursday, 28 May 2020 WCAG2.0 - what is it and should you care?

Are you a Non-Profit or Not-for-Profit? Save 50% here!