SEO has gone through so many changes over the years. When I first started building websites in the mid 90s the term didn't really exist. There were so few site (relatively speaking) that you had be be doing something awfully wrong not to rank OK.

Then came metatag stuffing, keyword stuffing, link farms, link building, and it's slowly working it's way round to quality content; which, IMHO, is where it should be. Why should the fact that 10,000 sites, profiles, or whatever link to a certain page make it relevant, good content or even true? We all know that there's an enormous amount of rubbish and misinformation out there on the web. And also a lot of users who don't know right from wrong! 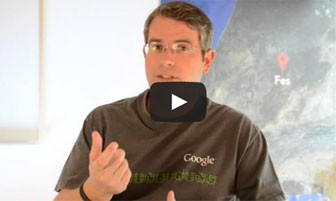 In a video published by Google Webmaster Tools (click the image to watch Max Cutts talking about backlinks), Google Webspam team member, Max Cutts, talks candidly about the future demise in backlink value as Google's algorithm becomes, as he put it, "...more like a Star Trek computer, so, conversational search..." He also says that, while backlinks still have many more years left in them, their value is going to diminish. I, for one, don't see this as a bad thing, as he also explains that they will be looking at authors as authorities to give content its authority which does make more sense. Consider this scenario...

Joe Idiot, a complete non-authority, writes an article called "The rise of the Blue Widget" for his site. With some expensive SEO work on backlinks, he gets that page to the top of Google. Unfortunately, his article is complete garbage. Mary Widget-Authority writes a second article called "Red Widgets are better". Alas, she doesn't have the dollars Joe has and her article sits, invisibly, on page 9. With the current situation, Joe wins. With the projected scenario from Max Cutts and Google, Mary will win as she's more of an authority.

The bottom line is we won't see backlinks disappear overnight, or for many years. However, like so many other SEO areas, backlinks will begin to diminish in value or weight as we move forward to authoritative authors and quality content. Which page would you rather get when searching for widget comparisons - Joe's rubbish because he spent loads of money on backlinks, or Mary's as an authority on widgets?

More posts from author
Monday, 02 August 2021 Is that Domain name renewal legit or a scam?
Thursday, 25 June 2020 Using copyrighted image without consent scam
Thursday, 28 May 2020 WCAG2.0 - what is it and should you care?

Are you a Non-Profit or Not-for-Profit? Save 50% here!