In the first 4 months of this year, Google has rolled out a number of algorithm changes which has changed the face of SEO.  Not that this is new to any of us in the industry - just another frustration to deal with and adjust to.  But, like other major updates, it has changed the way of SEO - again. 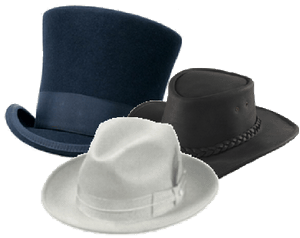 What color is your SEO's hat?

Various forms of SEO are referred to by different colored hats.  While I've seen up to 5 or 6 colors described, there are, in my mind, really just 2 - white and black.  I guess you can argue that, if you do a bit of both then you're doing grey hat, however, the possible outcome of you bit of black hat work will result in the same penalties, maybe just a little slower.

Ethical, by-the-book (the book is written by Google - bear that in mind), no harm no foul SEO.  Google claims it wants to provide the most relevant results to whatever search phrase a surfer enters.  And that's probably where they started.  Now, I believe, they're more about being big business and making a load of money, and one way of helping that is doing good search engine work.  It now appears to be more a means to an end than the end itself.

This is "naughty" (by Google's definition) SEO that attempts to manipulate the search results.  Link farms are a good example of black hat SEO.  Piling a bunch of unrelated, random links into a website just to get backlinks.  However, with anything, where do you draw the line?  Is Angies List or DMOZ a link farm?  Technically, yes.  Google crows about businesses needing to get themselves listed on Google local places, but I would contend that this is just a sophisticated link farm as well.  Again, where does a "link farm" stop being a "link farm".

In my mind, two very important changes have appeared this year, and seem to point to where Google's thinking is going.  The earlier one is regarding fresh content.  We've all known for a long time that fresh and unique content is good.  Now Google have made it official.  It now seems that they're weighting fresh content higher than old content in the results.  This now means blogs are more important than ever.  And keeping pages fresh and up to date.

The second very interesting change is it appears that Google is giving more weight to page content "above the fold" or, conversely, penalizing those sites where the content promised in the search results appears "below the fold".  Consider this quote from Google...

"Rather than scrolling down the page past a slew of ads, users want to see content right away. So sites that don't have much content "above-the-fold" can be affected by this change. If you click on a website and the part of the website you see first either doesn't have a lot of visible content above-the-fold or dedicates a large fraction of the site's initial screen real estate to ads, that's not a very good user experience. Such sites may not rank as highly going forward."

Of course, the problem with this statement is that the page real estate visible to users varies depending on their computer configuration.  Screen size and screen resolution determine how much you can see at any given time.  Now I abhor having to scroll through masses of junk, or use Ctrl-F, to find the content I want, but I'm not convinced that this shift is going to produce the better quality content and sites that Google thinks it will.  I believe it will just, again, muddy the waters without returning any meaningful positive gains, and just cost numerous site owners money to redesign their sites to try and keep up with the search engine monster that is Google.