Internet costs & speed - are we being ripped off?

We switch on our computers and expect the internet to flood into our room. And, usually, that happens. But are we getting the speeds we deserve, or even, that we are paying for? 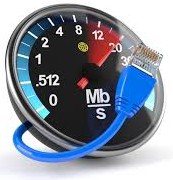 By the end of this year (2014), Americans will have paid about $400 billion (yes, with a "B") by major players, AT&T, Verizon, and CenturyLink to "future-proof" our network with fiber optic cabling. Cabling that NEVER materialized! Though varying between states, once all the fees, taxes and surcharges are taken into account, every household would have been fleeced about $4-5,000 from 1992-2014.

Back in 1992, state laws mandated that broadband speeds should be 45mbps in both directions. My current Cox connection (in Phoenix) gives me about 65Mbps download, and around 11-12Mbps upload - a far cry from 45 each way. It might be comforting, at least, to know that, poor speed aside, we in America at least enjoy some of the best speeds worldwide, right? Wrong! We aren't number 1, or 2, or even 5. A recent test by Ookla (one of the net's standard testing companies) pegs the good ole USA as number 25 in download and number 40 in upload speeds.

By the end of 2010, based on phone company promises, plans were to be put in place to charge us, the end users, for broadband upgrades of telco wiring to our homes, businesses, schools and libraries. It seems it never was, though telcos have continued to bill us for it.

I don't want to get on a political thing here, but I am saying that we need to stand up and make a noise about this. None of our customers would be happy if we charged them for products or services never delivered.

More on this can be found in this fuller article (credit for this blog to the author of it).